“Dotyk międzynarodowy” is an interactive projection combining collage and moving images. The idea results from my early age interest in the technique of collage and the wish to return to it. The work refers to the human condition and current problems of the world.
As an attempt to approach these problems and reflect on them, I use photography, video recordings and an interactive tool. Interactivity is a tool that allows me to create a special “place” where somehow the viewer can enter into the collage and take part in it. 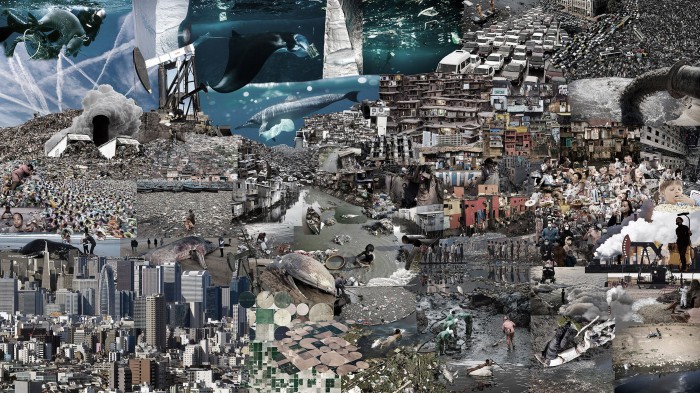 I Collage
I started by cutting out fragments of reality and build a panorama with them. The collage is an assemble of photos I found on the internet. It presents a kind of panorama of things or situations that are happening in the world. Every day we are bombarded with sensational news and yelling tabloids about various topics; we know that we breathe more and more smog, we know that there is war somewhere in the world. We listen to information about the fact that people and animals are often dying of trivial causes that could be stopped with little effort. We know about the problem of global warming and which are its causes and consequences.
Photography is connected with the reality of the real, physical world that surrounds me. I decided to use images from the internet, because they were made by people who were there and have seen this reality with their own eyes, unlike me. Although it is abstract, it represents real things.

II Film
Film is a form of video: a moving image. It depicts colourful paint spilling. I wanted to capture colours, abstract forms that do not represent any specific shapes or symbols. I had different concepts to present these “colours”. I was considering generating them by computer or using out-of-focus film shots. However, I decided on paint because it is a material which is very familiar to me, still more familiar than dry digital pixels.
In my earlier work, I wrote about painting: “I am interested in dialogue and the relationship between form, colour and matter. Painting has always been present in my life and is a natural form of expression for me. “I would like to add that sometimes, to some extent, painting also has a therapeutic dimension for me. Painting is a way for me to deal with brutal reality. The film is a synthesis of the painting process. I thought that if I had to show the process itself without the final picture, it would be simply spilling paint. 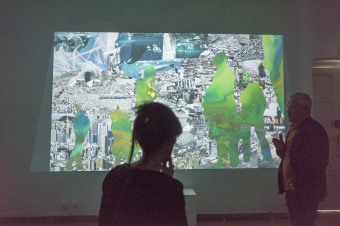 III Interactivity
On the collage projection, the viewer’s silhouette appears, it is filled with moving abstract colours that are depicted in the film. Through a kinekt, the viewer is able to discover colour compositions from the film score. This colour composition is my reaction to “reality” (meaning what the collage presents). I want to invite the viewer to actively participate in the installation. I am interested in having/giving the right to choose (even if it is limited) between the collage and the colour composition. Although I assume different scenarios, I can never completely predict the spectator’s reaction. I am curious whether if he is more interested in a collage or discovering the film composition.

Featured on Font nie czcionka! art, culture and design site.
As one of the best diplomas in the Artistic Project Category from 2017.

This site uses Akismet to reduce spam. Learn how your comment data is processed.

© Flávia Rodrigues Piątkiewicz and www.kiwiklawis.wordpress.com, 2016. Unauthorized use and/or duplication of this material without express and written permission from this site’s author and/or owner is strictly prohibited. Excerpts and links may be used, provided that full and clear credit is given to Flávia Rodrigues Piątkiewicz and www.kiwiklawis.wordpress.com with appropriate and specific direction to the original content.